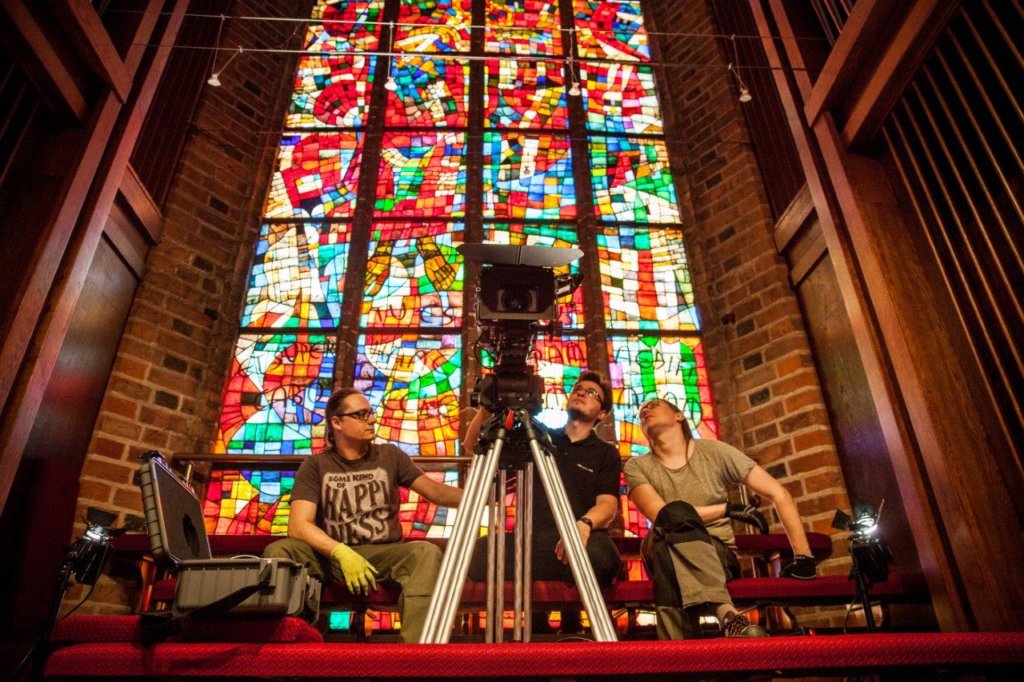 From the Inside – A different view of the Cathedral in Poznań, ©PSNC

In recent years, there has been a very dynamic development of immersive media technology. Consumers are becoming more and more aware of the higher image quality and choose solutions that offer such quality in their home, but also in cinema or outdoor entertainment applications. Equipment manufacturers are faced with the challenge of developing new solutions offering higher resolution and better quality of both image and sound. There are currently three technological trends in the market for immersive media:

The first one is image quality: Both resolution and colours are playing an increasingly important role in consumer choice. The first 8K displays are available in stores and all manufacturers declare even basic HDR compliance. 8K content as well as live transmissions in this resolution are currently carried out by only a few companies, but they are gaining great interest.

The second trend are immersive installations, so called Location Based Entertainment (LBE) installations. Previously available mainly in research centres, they are now increasingly used in entertainment. We are seeing a growing interest of viewers in new types of visualization installations, in which they can participate not only independently but also in group immersive experiences.

The third important aspect is interaction: Users who use HMD-based interactive applications at home would also like to see immersive interactive content in LBE installations. More and more such places offer Virtual Reality experiences – often also in multiplayer mode – where you can influence the action presented on the big screen.

The biggest barriers to the adoption of such new immersive technologies on the market are insufficient resolution and quality of available devices as well as high implementation and content production costs for large LBE installations. Considering that the viewing angle of the spectator is about 120 degrees, the resolution of the images recorded by the cameras should be far beyond 8K. Although there are 360° cameras available on the market that record video with resolutions higher than 8K, these are either prototype or very expensive custom-made devices. Many companies aiming at this segment of the market have abandoned production, or have taken up other research topics.

Another issue is the lack of technological standards or standards that are still being developed. Highresolution immersive media requires recording a huge amount of data, fast transmission and video transmission standards, effective codecs or standardized display formats. All these elements are already available, but each LBE develops these solutions from scratch, integrating them in a way tailored to their specific requirements, which of course does not encourage the creation of new installations of this type.

How Immersify is challenging the status quo

And this is what the Immersify project aims to change: We want to adapt our work to the requirements of the market but in a way, where we break down existing barriers. For example, the subject of immersive media is treated comprehensively – from creating demonstrative content and documenting the process of creation through articles and guidelines for creators to ngoing cooperation with artists who draw inspiration from the technologies Immersify offers but also point to limitations or shortcomings that we try to solve. At the same time, we are working and researching on using existing applications, developing tools and refining technological standards, like the adaptation of the HEVC coding technology to the requirements of high-quality and immersive media. The codec developed by Spin Digital is optimized for various types of content like recordings from 8K cameras, 360° cameras, 3D rigs, computergenerated graphics as well as point clouds. Immersify also offers solutions for ultra-high-resolution media playback, streaming or displaying on various types of LBE visualisation installations like large 8K screens, immersive installations such as Deep Space 8K at Ars Electronica in Linz (Austria) or the Dome Theater at Visualisation Center C in Norrköpping (Sweden), and other types of displays such as cylindrical CAVE consisting of 45 curved 8K TVs at PSNC in Poznan (Poland). Each of these installations is built differently, but can use the same encoding tools and display software.

In Immersify, in addition to ultra-high-resolution video, we are also working on immersive sound and immersive interactive systems. Within the project, Ars Electronica has worked with the BBC and ScanLab Projects to customize their laser scans of the large pyramid in Giza for 12K rendering and use it in interactive applications. The resulting experience allows you to move around the interior of the pyramid and interactively choose between further directions to explore this monumental building. And this is only one example of applications that may be developed in the future.

If you want to learn more about the tools and content developed within Immersify, you can take a look at our Guidelines and Contents and Demonstrations.